In the last lesson, we got familiar with numeric types. In this lesson, we'll learn about common text types. After this lesson, you'll be able to understand, use, and manipulate text in Haskell easily. Are you ready? Let's go! 💪🔥

Char is the type we use to represent a

The Unicode standard (Unicode) is a set of rules that enforce a way of handling and expressing text. It's needed because computers think in numbers (ones and zeroes), and we have to collectively decide which numbers represent which characters.

It's actually a little more complicated (see: Character encoding. But for our purpose, we just want to know that we can use almost any symbol that we'll ever need by using Unicode characters. Letters, numbers, and more than 140k+ symbols.

We write values of type Char (Unicode characters) between single quotes. Like this:

Note that if you write a number surrounded by single quotes (like in the last expression), Haskell won't treat it like a number. It will treat it like any other character. So, you can't do math with '7' (with quotes), but you can with 7 (without quotes).

Important: You can only write a single character at a time! This: will make your compiler yell at you. And you don't want to start the relationship with your compiler like that. 😅

This one is easy, so we won't waste more time on it.

I know that you want to write more than one character at a time. I get it. You don't want to sound like a freezing caveman. 🥶 But before that, we have to learn about lists.

A data structure is a data organization, management, and storage format that enables efficient access and modification. Is a collection of data values, the relationships among them, and the functions or operations that can be applied to the data.

. This is just a fancy way of saying that they are lists that store elements of the same type.

We represent lists by starting with [, writing the elements separated by ,, and ending with ]. This is an example of a list with three numbers:

And this is an example of a list with 5 characters:

Important: Lists are homogeneous! That means that you can't have a list with elements of different types! [1,'2',3] will give your compiler a serious migraine! '2' is a character, not a number! You can't have both Int and Char types! You have to choose one or the other!

In option 1, we indicate that all the numbers are Float.

Keep in mind that you can't specify a type that doesn't fit with the elements. If you have characters as elements and specify a numeric type, you'll get an error.

Usually, it's not needed to specify the type at all. Just let Haskell infer its way through and keep on coding.

Strings represent lists of characters. You can use the String type to write messages, alphanumeric values, symbols, etc. Unlike Chars, Strings are surrounded with double-quotes like this:

It's both! 😁 Because String and [Char] are the same type! More specifically, String is

Syntactic sugar is syntax within a programming language that is designed to make things easier to read or to express. It makes the language "sweeter" for human use: things can be expressed more clearly, more concisely, or in an alternative style that some may prefer.

for [Char] So, you can use them interchangeably.

What you can't use interchangeably in Haskell are single and double-quotes. Strings (written in double-quotes) are lists of Char (written using single quotes). These are not the same!:

As you can see, we can write a String with a single character (e.g, "p"), but you can't write a Char with multiple characters (e.g. ). 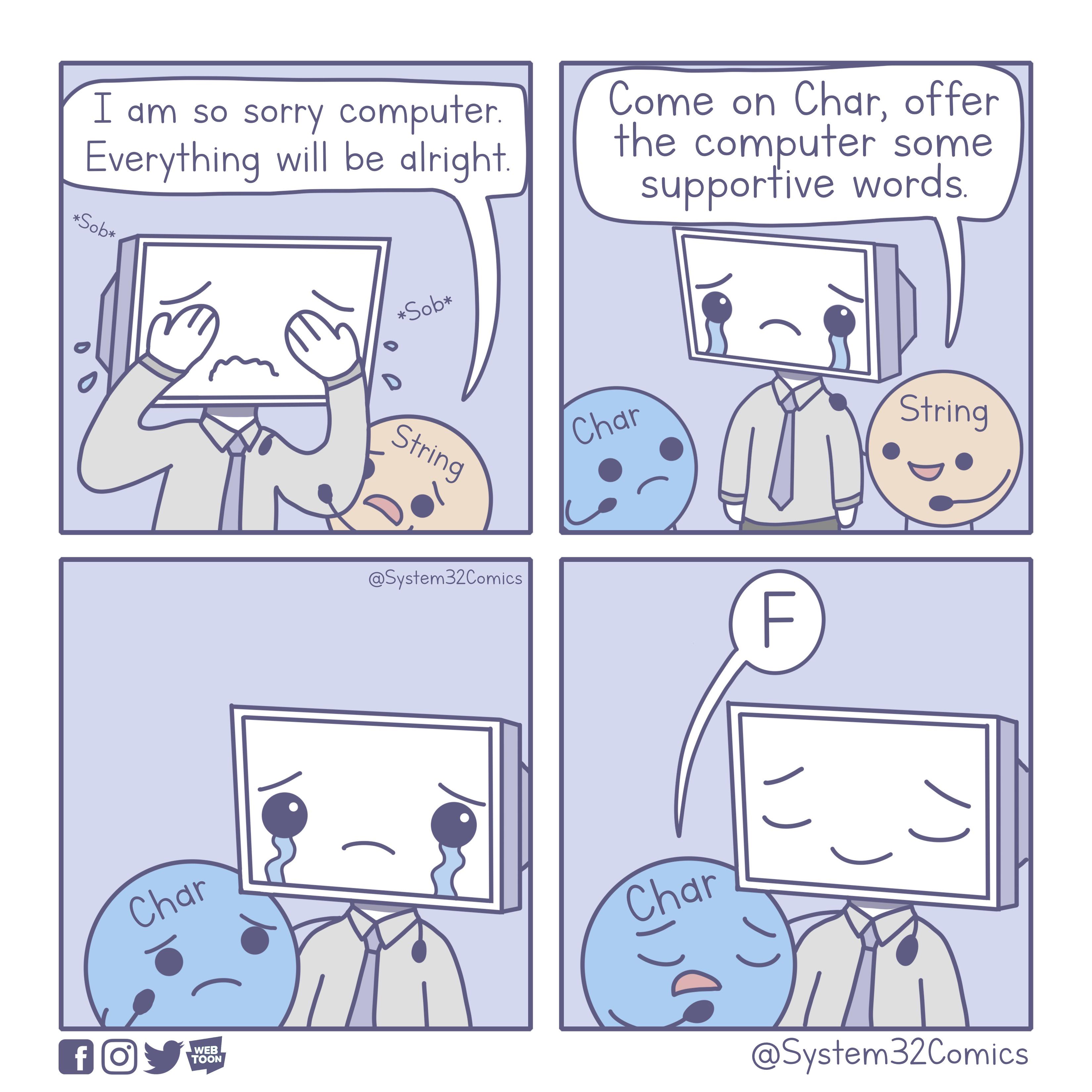 Now that we're familiar with lists and Strings, let's have some fun!

You can access a specific element inside a list by using its index. Every element has an index determined by its position inside the list — starting at 0 (zero).

So, in this case:

Lists indices start at 0 in almost all programming languages. 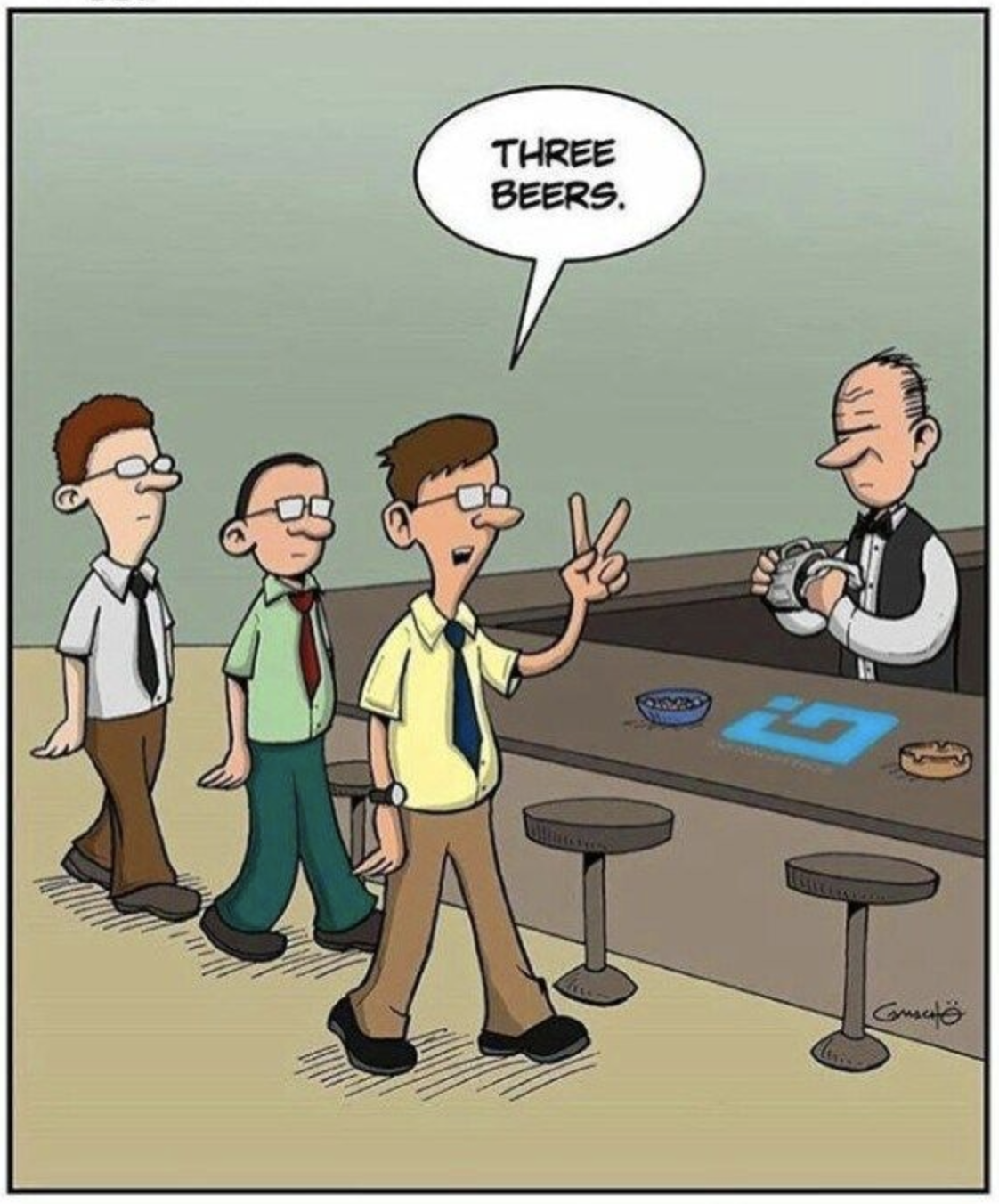 Now, how do we access a specific element using the index? By using the !! operator. The !! operator has to be written like this (a list to its left and the index of the element we want to its right):

An error! Because there's no element of index 3. The list ends at index 2 of value 'f'! If you try in GHCi, the compiler will tell you that the index is too large.

Accessing elements sounds wonderful, but what if you have a bunch of lists? Do you have to access them one by one? Well, you could. But you could also concatenate them first! 👀

A common operation with lists is

Concatenation is the operation of joining two things (usually strings or lists) end-to-end.

We concatenate in Haskell by using the ++ operator. Even though we know that this operator is two + one after the other, Haskell doesn't see it that way. For Haskell, ++ is a single thing! It's an operator that concatenates two lists (and only two lists). Nothing to do with +.

We can use the operator like this (try it out in GHCi):

Exactly! Strings are lists as well, so we can do all the things that we can do with lists.

We can also use the operator as much as needed:

This way, you can create complex messages by combining more simple ones.

Ok, that's it for now. I have to leave something for next week! 😂

We can do many (many many many) more cool things with lists. That's why lists will have their own lesson (maybe two lessons? 🤔, we'll see). For now, make sure to complete this week's homework! 😄

Predict the result of the expressions (use GHCi if needed)

Error! You can't concatenate a lists of different type!

It's 2! The expression to obtain the result is:

Error! You can't concatenate a string with a single character!

By indicating that they are of type Double:

We're done for today! 👏 Next lesson, we'll learn about Booleans and Tuples! Those will be our last types before learning about functions!! 🤩 See you there!!

PD: If you find this course valuable, please share it so more people can learn! 😄